President’s Proclamation on a Travel Ban 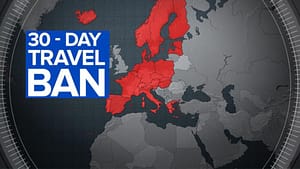 Know the Facts. Reduce the Fear.

On March 11, 2020 President Donald J. Trump issued a Proclamation suspending the entry of certain Immigrants and Nonimmigrants based on their risk of transmitting the coronavirus.

Here are some FAQs based on the key facts from that Proclamation.

When does the ban take effect?
The temporary travel ban is not in effect one (1) minute before midnight eastern daylight time on March 13, 2020. Travel starting March 14 will be impacted.

Who is affected?
The ban applies to certain people who were physically present in the Schengen Area within the past 14 days prior to travel. You are not affected solely by your citizenship status.